Note: This is the second in a series of “Remote Work at Leadtail” posts. Read Part 1 of the series, in which Ed documents his travels to Copenhagen, Malmö, Stockholm and beyond.

We all know how working while traveling can present us with challenges and obstacles to overcome. Fortunately, these days, the platforms for communication and getting work done makes it possible to manage seamlessly, or at least partially.

Taking off for a three week trip

For three weeks in November and early December, I was on the road working from 9 different cities and three time-zones. My journey started in San Francisco, where we were managing social media for LeanData’s big OpsStars event.

Each night after the day’s sessions, we were back at the hotel, making sure all schedules, reports, and ongoing activities were up to date and being managed for our clients.

On the afternoon of the last day of OpsStars, I boarded a plane for an overnight stay in Vancouver and where the next day, I was off to Tokyo, but not before attending two meetings on BlueJeans while at the airport.

WiFi on the go

After a comfortable flight to Japan, my first task was to pick up my pocket WiFi, which allowed me to access the Internet on my phone and laptop during my travels across the country. As it turned out, this became a must-have device while in Japan, Taiwan, and South Korea, which worked just fine with my VPN.

Setting up working times while 18 hours ahead

Up next was setting realistic goals for my daily/nightly routine where I could manage the time zone difference (18 hours ahead) and still be flexible enough to get out and see the sights, and of course, sleep.

As it turned out, I found myself going to bed around 9:00 PM and then getting up from 12:30AM to 3:00AM, when I could take on most of the critical items. I would then get up again around 7:30 AM and work for another hour or two before heading out for coffee and breakfast. 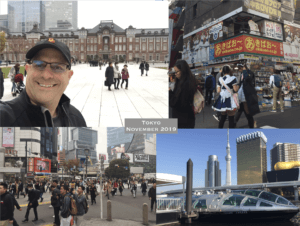 My week in Japan was deliberately scheduled during Thanksgiving week, so most of our activity was slower than usual. After four days of exploring Tokyo’s impressive sights and sampling its amazing food, I flew down to Fukuoka, and then hopped on a train down to Nagasaki.

After a splendid evening and interesting morning visiting the peace park and hypocenter, I returned by train to Fukuoka, where I then caught the Shinkansen (bullet train) up to Hiroshima. At just over 330 kilometers per hour (kph), or 187 miles per hour, this was the fastest I had ever traveled on land. This record would only last eight days (see below for my ride on the Maglev). Although the WiFi worked and the connection was satisfactory on the trains, it went out as we went through multiple tunnels. As a result, I kicked back for most of the two-hour trip up to Fukuoka and the hour-long journey to Hiroshima.

Visiting Nagasaki in the morning and Hiroshima in the evening of the same day was a moving experience for sure. They are both beautiful and vibrant cities with restaurants, cool street vendors, and of course, many memorials and museums that were well worth the visit.

Each day (and night), I found blocks of time to work before heading out to eat and see the sites. After a night in Hiroshima, I was back on the Shinkansen bound for Tokyo. It is not an understatement to say that these trains are magnificent works of art that are sleek and ultracool.

A little over four hours later, I was in Tokyo Station, having dined on ekibens and beer. What a fantastic way of traveling!

Developing a routine at airports, hotels and Airbnb’s

The next day, I was in Narita Airport, heading for Taiwan. Airports are great places to work with headphones on and a quiet spot, or at a business lounge if you are so lucky. During this trip, I was able to accomplish a fair amount while camped out at the airports. My work routine for four days in Taipei and later for three days in Seoul remained the same, where I was awake during the early hours of the day. In Shanghai, I was there overnight, and although the Internet worked with my VPN, the connection was spotty at the hotel. Later, at the airport in Air China’s business lounge, the WiFi connection was far better. (See my LinkedIn post about the security needed to access the Internet while in China.) For the type of work we do on social media, I won’t be going back to China anytime soon while working remotely because the Internet isn’t reliable, even with a VPN.

Getting back to Pacific time

Getting back to Portland after 22 days was much easier than I had thought. I didn’t suffer much jetlag and was back to the usual routine and regular daytime hours almost immediately. The challenge for this trip (and earlier this year in Scandinavia) was setting a realistic work schedule and sticking with it.

Going to bed for four hours and then working for three hours, followed by another four hours of sleep, isn’t ideal for home, but on the road in different time zones, it proved useful.